How do European capitals compare in access to information?

Austria’s capital Vienna has repeatedly topped the best quality of life rankings. Switzerland’s Bern is ranked as Europe’s safest capital and Paris has recently become its most expensive capital city. But which one gives its citizens the best access to information about how the city is run?

Comparing cities based on how well they communicate and provide citizens with access to information could go a long way in tackling corruption and improving trust between citizens and government.

A transparency comparison would encourage cities to share best practices and push laggards to improve. Such a measurement could also inspire national politicians to work on transparency issues.

Unfortunately, there is no such measurement, even though there are many reasons why it should exist.

So, we decided to create one. In December 2018, we developed a small pilot comparison together with two dozen European chapters from Transparency International.

Our study looks at how citizens from 26 European capitals currently access information. Specifically, we examined what information city governments make available to their citizens about what their representatives are doing in their jobs, how they spend taxpayers money and what rules exist to prevent corrupt behaviour.

Although fourteen indicators are not enough for a comprehensive comparison, this small sample size still offers some initial results that could be useful for additional research and follow-up.

What are our mayors doing?

Our research revealed a wealth of information about what details cities do and do not publish, including in the mayor’s office.

For example, on Wednesday, June 12, the Berlin mayor, Michael Müller, welcomed the Abu Dhabi crown prince, Sheikh Mohammed bin Zayed Al Nayan, for a visit. Later that day, he attended a press conference for a science event and gave a speech at Templehof Airport.

The very same day, Linas Kvedaravičius, the Mayor of Lithuania’s Vilnius, met the Croatian ambassador to Lithuania, Krešimir Kedmenec, and held a number of meetings with his advisors and staff.

The public had all of this information available online in advance.

By contrast, visitors to the official webpage of the Slovak capital, Bratislava, will not find any information about the meetings of its new mayor, Matúš Vallo.

In fact, 18 out of 26 capitals that we studied, do not provide such information to their citizens online.

Where does the money go?

Knowing what mayors do is important, but so is tracking how their money is spent. While publishing budget details online seems like a universal practice in many European capitals (with Belgrade and Chisinau being notable exceptions), details on municipal spending are far less likely to be provided to the public.

For example, most cities will not publish a full copy of their contracts with internet and telecom providers. Many cities, from Athens to Lisbon and Yerevan, did not answer our freedom of information requests at all.

Of the cities we reviewed, Stockholm was the best example of how to present technical data, such as budget plans and spending, in an easily accessible way, with clear materials, stories and infographics.

Full results on all the capitals can be found here. 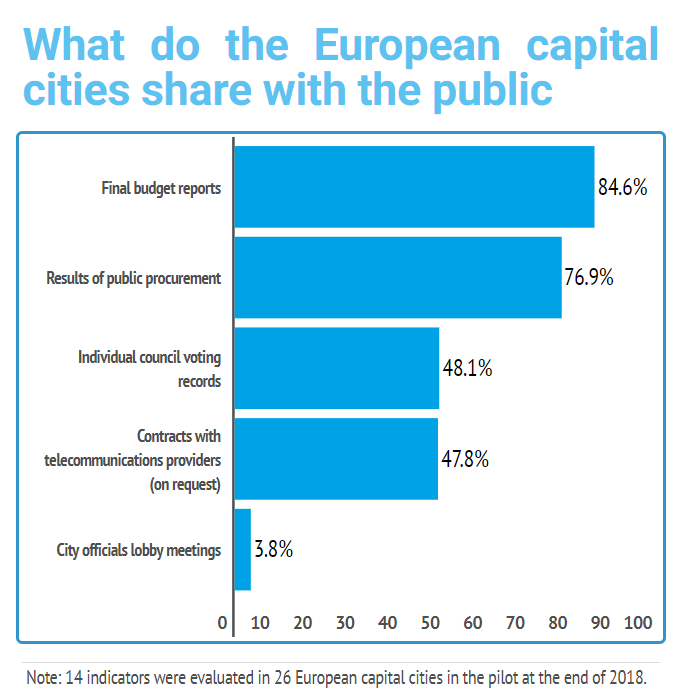 What about access to the decisions of the city councils? Most of the capital cities provide detailed minutes from their councils’ meetings online. Amsterdam’s handling of the video archives appears the best. They cover all council meetings, including full transcripts of discussions.

Two-thirds of the capitals publish relatively detailed information about their councillors. The best example of this is London, which includes information on salaries,  speeches at city councils as well as the gifts received, such as invitations to dinners or tickets to a tennis tournament.

Surprisingly, only half of the European capitals sampled provided the salaries of their mayors and councillors when we asked for them. And even within those who answered there were huge differences in speed. Tallinn sent the numbers the same day we asked by email, while it took six weeks to both the city officials in Amsterdam, and as many as seven weeks in the case of London.

While it is hard to draw broad conclusions, given the scale and limited number of indicators in our study, there are some patterns that have emerged.

But there are large differences among them, too.

For example, Kosovo’s Pristina has done very well in most of our indicators, with Vilnius and Prague not far behind. However, Belgrade and Yerevan are among the worst performers in our study.

Importantly, various cities did well in different policies. This confirms our expectations that a large-scale comparison could produce a variety of great practices to share.

Such a comparison will always have its difficulties, of course. Some practices of cities depend on requirements of the national legislation rather than on their own effort. Some cities have much more limited powers than the others. Countries with more corruption will find it more important to have formal transparency laws than those who manage quite well with their informal yet fair practices.

One way to encourage even more innovation is to create a detailed European city transparency comparison that spurs local governments to do more to fight corruption and improve transparency. The focus could be extended not only to other topics (recruitment, grant-giving, rent and sales of property) but also to their data quality. It is still common for cities to publish their documents in formats that are hard to find, sort and even understand for the general public.

Further research could then shed more light on what impact transparency has on levels of corruption, citizens’ trust to democracy as well as their wellbeing. City governments, being closer to citizens than their national institutions, are a perfect place to start.