Tepláreň Košice, a heating plant, is the most transparent public company in Slovakia

The openness of Slovak companies owned by state, municipalities or self-governing regions has increased only slightly in the past four years. While they operate with billions of euros, managers of these enterprises are often under lower public oversight than mayors of small villages.

The most transparent Slovak company owned by public sector of 2019 is, according to the new Ranking of Transparency International Slovakia, Tepláreň Košice, a.s. – a heating plant in Košice. This state-owned joint stock company obtained 89% and is the only one with an A+ rating. The overall second-place Mestské lesy Košice, PLC, with 75% is also the most transparent firm among municipality-owned enterprises.

At the other end of the ranking are two municipal firms operating summer pools. THERMALPARK DS, PLC in Dunajská Streda and TERMAL, Ltd. in Veľký Meder received 11% and 15%, respectively.

We evaluated 100 companies fully owned by public sector, out of which 48 are state-owned, 47 are municipality-owned (including 14 water-supply companies owned by more than one city or village), 3 are owned by self-governing regions and 2 by universities. Together, these enterprises operated with almost 10.5 billion euros in 2018. The sum is comparable to two-thirds of the state budget revenue. They employ tens of thousands of people as well – four of them even belong to the Top 10 biggest employers in Slovakia.

While public companies influence the quality of services from road infrastructure, public transport, heating, drinking water and waste disposal to public service media, the space for the public oversight of their managers is often very limited. Using the ranking, we are providing more information on the management, tenders, properties, salaries and sponsorship policy of these firms. 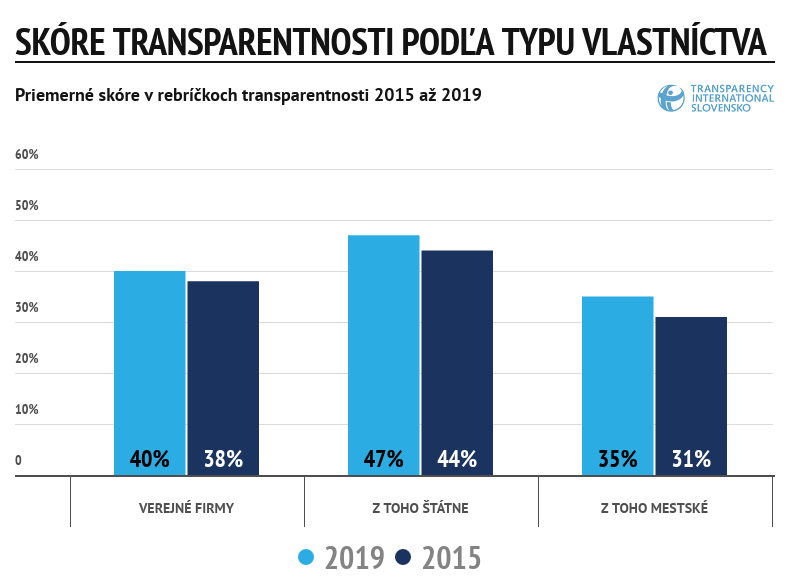 The overall score of transparency of public companies insignificantly exceeded 40%, which means a slight progress in comparison with 2015 (from 38.2 to 40.4). State-owned companies are a bit more open (47.1%) than those governed by municipalities (35.4%), self-governing regions (29.9%) or universities (20.3%). The result is, to a certain extent, logical, because state-owned companies have much bigger budgets and more employees. However, the approach of management or the owner is more crucial, which can be seen in the second position of a relatively small municipal company Mestské lesy Košice with return of 6 million euros and only 46 employees.

The ranking measured 57 indicators divided into 6 categories and used data from companies’ websites, annual reports, financial statements, questionnaires sent by Transparency, citizens’ requests under the Freedom of Information Act, from the Central Register of Contracts and data on the Public Procurements Office’s portal.

The highest average score companies collectively obtained in the category of Economic indicators (47%). Public audience has good access to the data about the financial situation mainly thanks to the publishing of annual reports and financial statements. Despite the fact, there is still almost half of companies that do not publish their plans and KPIs for the upcoming year and then their results. The public can hardly form a relevant opinion about the performance and efficiency of the managers working in the public sector. 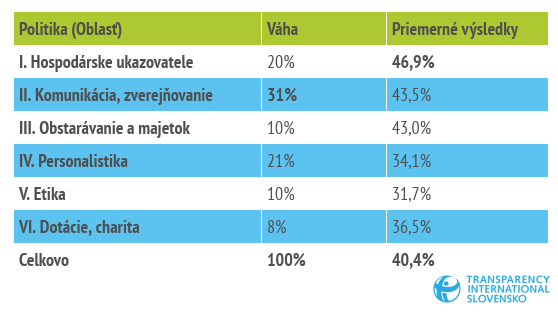 The lowest average score firms obtained was in the Ethics category (32%). Despite the fact that there were three times more companies with Code of Conduct compared to 2015, two-thirds of them do not have these rules published. Anticorruption strategies and systems for resolving unfair practices are also lacking. As a part of the rating in this category, we have anonymously contacted the firms with information that one of their employees could have received a valuable gift. In two weeks, only 46 out of 100 companies were willing to deal with the problem.

Issues with lack of transparency are also present in other fields. Many companies are still overusing exceptions in the Freedom of Information Act and refuse to publish details from important contracts or salaries of their managers. As much as 84% of enterprises do not publish results from proceedings of any of their bodies. Only two firms out of 100 publish the results of their selection procedures, specifically Tepláreň Kosice (a heating plant) and Slovenská pošta (a post-service).

Transparency International Slovakia compared again the results of our public enterprises with some private Slovak companies as well as with public foreign companies. Both of them are still more open to the public with their data.

The third ranking of public enterprises confirms the latest statements of National Bank of Slovakia, the Institute of Financial Politics, the Office for Budget Responsibility and the Value for Money Committee. In a conjoint study, they marked the public companies as “not transparent enough” and stated that they “act in the way their information duties do not relate to them”.

The transparency ranking is not measuring the level of corruption itself but the openness of companies to inform the public and the existence of clear rules and regulations for their decision-making processes. The firms with the highest score are then not automatically durable against corruption but the openness can help to uncover the wrongdoing easier.

The information about the ranking, including detailed presentation and comparison with foreign and private companies sample, can be found on firmy.transparency.sk.