As the director of new whistleblowing office we recommend Martin Rajňák

We recommend Martin Rajňák for the position of chair for the new Office for the Protection of Individuals Notifying Activities Undermining the Functioning of Civil Society.

After the public hearing, we assess candidates for the position of chair for the new Office for the Protection of Individuals Notifying Activities Undermining the Functioning of Civil Society.

To prove that corruption is happening is tough even when the police and courts work properly. That is the reason why the issue of the persons reporting activities undermining the functioning of civil society, i.e. whistleblowers – the people who witness these activities directly in the workplace – has been increasingly more discussed in the world.

We have had this law in Slovakia since 2015, however it has not resolved corruption issues in the country. A Transparency survey showed last year that more than two thirds of people are not even aware that there is a lawful protection of persons reporting activities undermining the functioning of civil society.

In 2018 such protection was granted to only 18 individuals, and merely to ten persons the year before. Moreover, most were not related to high-level state offices- last year the ministries only received two cases which were considered to be relevant. 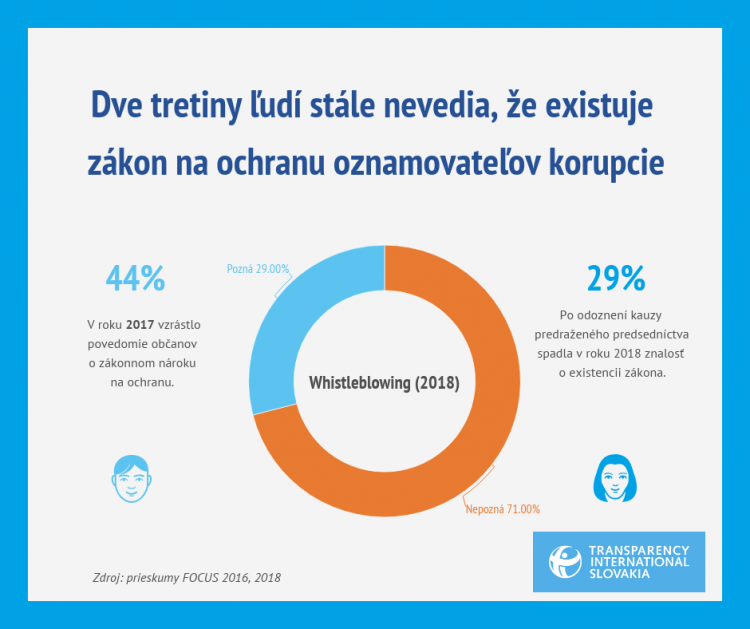 In response to this failure, a special office was created – a step which we at Transparency had been recommending for a while. Since the primary perquisite for a well-functioning office is its good leadership, we were particularly careful while following the public hearing of the new chair last week.
It is a good thing that public (both, online and in person) hearings of candidates for public offices as well as making the CVs and visions available to public is becoming a standard procedure. The last week’s hearing, however, has put the standards up even higher- the commission comprising of very competent members with available CVs (members appointed by the Office of the President, Government Office, Civil Service Council, Office of the Public Defender of Rights and the third sector) as well as offering enough time during the Q&A section. Approximately an hour was available for each of the eleven candidates.
Another positive feature of the public hearing was the interest of the commission to find out the real answers to the questions asked. Some questions were asked several times from different angles until the candidate answered them properly or until it was clear that he doesn’t know or doesn’t want to answer. The questions were about management competences, career growth or model moral dilemmas.
At this moment, the commission has time until next week to pick two candidates who may be first approved (or not) by the Government Office, and then it will be up to the Parliament to make the final choice. Given the fact that we have been involved in the protection of whistleblowers for a while now (we were the first ones to open the topic in Slovakia in 2001) and we were present at the hearing itself, we would like to assess all the candidates and give a recommendation for the winner.

We have evaluated the candidates by these five criteria: integrity (public stances in ethical matters), management experience, vision for the Office, and to a more limited extent by their experience in public service and their knowledge of languages. The new chair will have to, on one hand, represent a credible institution for potential whistleblowers (which the current office is not) to actually receive some submissions. On the other hand, they will need to be immune to political pressures in sensitive cases and will need to be able to stand their ground, sometimes against the (often inactive) police or the Prosecutor’s Office.

The closest profile to meet the challenge of future chair is the one of Jana Dubovcová in the role of the Ombudsman in the first half of this decade. Her publicly known moral stances and management experience after taking office were indeed confirmed in her performance.

Seven out of the eleven candidates have not, for a variety of reasons, persuaded us, therefore we absolutely do not recommend them.

Miloš Birtus, from the National Crime Agency, was missing a more complex vision of building the Office, as his project as well as his public presentation concentrated mainly on law provisions. What causes a bigger issue, however, is his lack of clear identity. As a longtime member of the of Slovak Intelligence Service, he practically did not state his personal opinions and stands during the public hearing. He might have been a good candidate but based on the available information, we practically learnt nothing about him.

Diana Migaľová Baschierová does not have management experience as she had worked as a speaker for public offices (in Slovak Business Agency at the moment- state agency for entrepreneur assistance). Moreover, her position as a speaker raises questions related to her ability to protect public and not political interests. Even though she presented her vision quite clearly, its fulfillment, from our point of view, is questionable. Would it be possible to establish as many detached offices as she has in mind? How would her “agents” work in the field?

The issue with Tibor Draskoczy, the head of the district police in Moldava nad Bodvou, was his really weakly explained motivation and lack of previous experience in the area. We did not learn anything about any of his stances, not even from the model ethical questions. His vision of the project is almost entirely based on law recapitulation.

Tomáš Jacko, a university professor, was an interesting candidate due to his engagement in ethical issues (in years 2010 to 2012 was our colleague in Transparency), even at his workplace- at the university. However, he misses direct management experience due to the fact that managing a public office cannot be compared to leading a civic association. What is also absent from his project is a more detailed personnel and financial realization of his declared vision.

The candidacy of Viktor Pokojný was undoubtedly driven by his personal experience with a problematic employer (private building society). However, this is not enough for the position of a chair of this Office. His view of whistleblowing is exclusively about the whistleblowers themselves, while the fight with activities undermining the functioning of civil society seems to come after all this.

Jozef Stopka is undoubtedly an experienced man who would be able to build up the Office as well as to manage it. He has experience in civil service and has been a head of District Offices (now with regional competence) for many years. Apart from his lack of vision and knowledge in the field of whistleblowing, his political past is the main issue. His membership in the political party SMER-SD is only suspended at the moment. His position of the Head of the District Office is a political office; therefore, such a person cannot represent a reliable figure for whistleblowers with different political stance.

Rastislav Šaling has probably experienced the challenge of whistleblowing most vividly of all. A doctor, who pointed to forgery of public documents, experienced the other side of the fight for public good. Unfortunately, from our point of view, his candidacy is missing provable management experience and a clear vision of the fight with activities undermining the functioning of civil society. Questions about personnel or finances are entirely absent from the project, which could be a huge issue for building this Office from scratch.

Suitable candidates, but not the best ones

Within the category of candidates who we think could be potentially right for the Office, but not perfect, would be the current advisor to the U.S. Embassy in Slovakia, Zuzana Dlugošová, and a lawyer dealing with environmental issues, Daniel Krošlák.

A great advantage of Dlugošová is her previous involvement in ethical questions as a lawyer, as well as a professor at the Faculty of Law. She openly criticised the police and Prosecutor’s Office at the hearing, which is something that most did not have courage to do. We see her vision of the Office as an institution which should change the view of whistleblowing by the public as another strength. The weakness of Dlugošová is that she has little experience in human resources management (managing lawyer’s assistants is not the same as managing an office). Furthermore, her decision to ask for a reference from the dean of the Faculty of Law at the Comenius University, Eduard Burda, without asking him about his stand in the case of manipulation of admission tests at the faculty, which was brought to light by a former university employee, Zuzana Melicherčíková, was also questionable.

Krošlák clearly has a great academic career and is close to whistleblowers’ protection. But he has little experience in managing institutions. At the moment, he has only worked outside the academia for a year and during this time, he changed employers three times. His long list of publications was proportional to his reluctance to answer the questions, including the easy ones. Surprisingly, he was not even able to give his opinion on the controversial whistleblower, Edward Snowden.

Who was the best
Based on the hearing and provided materials, Martin Rajňák and Monika Filipová made the best impression.

The head of the local public service at the Ministry of Interior Filipová, out of the two, presented a slightly more complex knowledge and previous engagement in ethical issues. In 2016 she publicly criticised the conditions at various offices, but also provided ideas how to change it. Later, she created an initiative Dobrý úradník – Good Civil Servant initiative. She is publicly more known and for whistleblowers- many of them being civil servants- might seem more reliable.

However, her presentation and project were less structured in management questions (especially in the phase of building the Office) as well as in analytics- how will we know that the Office is successful?
Analyst in the field of strategy at the Supreme Audit Office, Rajňák has six years of experience at the Antimonopoly Office, and for about three years he was the director of the Department for Abusing the Dominant Position, which typically contains work with submissions from whistleblowers. His presentation was convincing, it seemed realistic and Rajňák presented his vision clearly and specifically.
An advantage of his project was the reference to analytical data which he would like to use when making decisions as the chair. His weakness can be his absence of engagement in public debates, which brings insecurity about how he would deal with conflict situation which will sooner or later come.

This couple of elite candidates is, from our point of view, quite even and we can imagine both candidates to lead the new Office. However, looking at the best quality of the project and analytical experience, we would choose Martin Rajňák. Filipová would be a good choice for the Vice-Chair of the Office.

What the Office cannot do alone
Even if this new office gets a good leader, Slovakia will still be far away from a situation where corruption decreases thanks to whistleblowers. This is because the key are the other civil servants- the ones with important roles at the police and at the Prosecutor’s Office. Thus, an important task of the new chair will also be to point to where the biggest responsibility is since despite the great courage of whistleblowers the fight against corruption still persists.
We wish all the best to the new management.